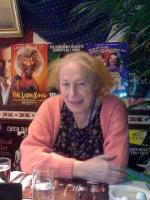 Me at Cafe Med in Berwick Street, Soho.

BRIEF SYNOPSIS OF MY HISTORY

I was born originally on 16th January 1944, at a time when bombs were falling on London.  My family were known as what was termed "respectable working class" in those days, and we lived in a flat above a restaurant off Tottenham Court Road.  I would class my upbringing there are generally quite happy, but sexually frustrated after puberty.   My first memory of being obsessed with women's cloths was at the age of 5.   From 5 to 11 I went to a conventional primary school, and thence onto a grammar school in London's East End.  Leaving school with 2 "O" levels in 1960, I went to work in a nearby office, and did various jobs until starting up my own business at the age of 25. Eventually that business collapsed, so I changed direction ompletely, and worked as a quantity surveyor up until my retirement from salaried work at the end of 2003.

Early in 2004 I had sex reassigment surgery.  This is actually an incorrect statement, as I never actually changed sex at all, but merely got rid of a birth defect, and reverted to what I should always have been, a woman.  It was a medical problem sorted out medically, there was no psychological adjustment, except the burden being lifted.

At the end of 2004 and beginning of 2005 I thought that I would paint one or two pictures.  Previously, in 1976, I had painted briefly using oils, and again briefly in 1994, again using oils, really as a method of escape.  Now in 2005, I began again this time using acrylics which are much faster to use and rather suit my impatient nature.

I used to be a regular visitor to the Philbeach Hotel on a Monday evening, and it was there that I first started to exhibit. After much encouragement I began to exhibited in cafes and bars in Soho, soon began to exhibit at LGBT events.  At first I began to paint in a conventional fashion, but soon became much more conceptual in tone.  My advice is that my paintings are viewed as "debating" pictures, which focus like a laser beam on a particular idea, such as the environment, economic or social issues. 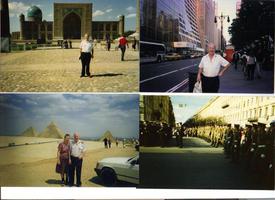