Check back here regularly to find out what's going on at ConceptualPainting. 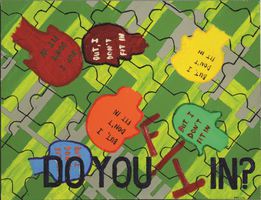 In 2009 I got involved in Pacesetters programme organised by the Royal Free Hospital which eventually ended with the production of the "Transgender Guide for NHS Acute Hospital Trusts".  This was a 62 page instrution booklet produced for all members of the NHS, which I am told was printed over 1 million times .  The lady in charge so liked my pictures that they used my artwork to illustrate the booklet throughout.  The front page has "Sunburst" on it, the same picture as at the top of this website.

Working on film dealing with what is relevant in peoples lives

This film comes about due to the accidental meeting between myself and Charli Botha at the top end of Berwick Street market. I just happened to be on my way to lunch and walked straight into a demo organised by the English Collective of Prostitutes, where Charli was taking pictures.  We started chatting, and she expressed an interest in my art, and then suggested making a film about me.  However, I thought that a film purely about me would be rather limited in scope, so I then came up with the idea of bringing other people into the film, each of whom had something relevant to say about their lives and aspirations.  The film is essentially serious with some lighter moments. More later as filming and especially editing gets under way.

I make it a habit to visit every art gallery I can, and first got to know the girls (Orla Bennett and Holly Lander)at Atomica Gallery when they were based in Berwick Street. They recently moved to the Covent Garden area, and when I saw them in their new shop, they told me that they had a spot on the new radio station Soho Radio, and asked that I appear on this talk (and music) show.  So being the shy and modest person that I am, immediately agreed. I not quite sure that know what they are letting themselves in for!     ..now broadcast and can be heard at www.mixcloud.com/sohoradio/artbeat-ep-2

"GETTING LAID"  book project.  This came about throught the accidental meeting of my friend Katie Xanda with Annabel Moeller at the Wellcome Foundation recently.  Annabel said that she was writing a book about how people today go about preparing and eating their dinners, and how they lay their tables, hence the title of the book. Annabel suggested that we might like to take part, so we readily agreed.  This actually reminds me of the Geffrye Museum and their themes of English social history, although they only go up to around 1990.  So this reflects the same in the 21st century.

At present my works appear on the websites of PALLENT HOUSE GALLERY see under OUTSIDEIN.ORG.UK based in Chicester, Sussex & RISEART based in central London.

Quite by accident In 2012 I happened to wander into The Society Club at 12, Ingestre Place, and met Babette and Carrie who run this special place, got chatting, and they asked if I would exhibit some paintings, which I did.  The exhibition was highly successful, and ever since I have been a regular member of their Soho circle. It's mainly a bookshop during the daytime, but in the evening they have functions where photography is displayed and books are launched.  It's actually become something of a cultural enclave, and a brilliant place to meet people of like minds.

I have two pictures on their website at the moment -

The Fortress - basically this is Soho under siege from developers and

Squeezing blood out of a stone - which is about the problems of running any small business.

Looking forward to taking part in event being organised by the brilliant MILAN SVANDERTIK, entitled www.outsidersinlondon.org, about people who consider themseves apart from "normal" or "conventional" society.  My photo appears on his website as number 8.   This exhibition is now being arranged for preview on 30th March 2015

CHROMOPHILIA  The joy of colour

Amazing new artshow being held at The Conference Centre, St. Pancras Hospital, 4, St. Pancras Way, London NW1 OPE opening Thursday Sept 11th 2014 from 5.30-8.30pm.  All  about the use of colour in art. Should be a great evening.

My photo appears in the Wanstead & Woodford Guardian 9th Oct 2014

Recently I heard that Madame Jojo's had closed having been targeted by the authorities for many reasons.  Soho appears to me to be under attack by a sanctimoniousWestminstercouncil, and also economic forces are at work to turn this (once working class) area into one of shoe shops, boutiques, hotels and other useless outlets.  The last thing thatSohoneeds is to be turned into a shopping centre, or worst still Finchley (no apologies to Finchley).   I felt that this needed an immediate (artistic) response, hence this new painting entitled "Puritan Attack" because that is exactly what it was.  Margaret Pepper.